Last week, TRON project went smoothly. We provided the progress of this week to all the supporters, believers and followers.

1. On June 16th, Binance, the world’s largest exchange, and TRON, the first cryptocurrency with the price increasing one hundred times in 2018, worked together to airdrop the most magnificent combination of BNB + TRX to BABI financial community. Follow BABI financial microblog and WeChat public official account, join BABI financial WeChat group and telegraph group, and share 100,000 TRX+100BNB airdrop gift package (currently worth 40,000 yuan). This candy airdrop event will open on June 19th, 2018 00:00 and end on June 25th 24:00 for 7 days;

2. On June 19th, TRON officially announced that according to the needs of blockchain game industry, TRON R&D team developed a blockchain experimental game application called Crypto Strippers. Players can earn gold coins mainly by buying strippers. Gold coins can be traded by players and the price of coin will fluctuate following trading conditions. Only four days after being launched, Crypto Strippers reached the fifth place on the game list of DappRadar; ten days after being launched, this game reached the ninth place on the general list of Stateofthedapps.com;

3. On June 19th, TRON officially announced that TRON’s Independence Day and the official launch of the mainnet is upon us! In addition, TRON has officially initiated the $20k Incentive Plan to promote the rapid development of TRON’s community, the engagement of Tronics, as well as the collaborative effort in building a thriving ecosystem. This plan offers a $20,000 reward to projects similar to TRON’s current outstanding wallets and blockchain browsers. Its purpose is to reward the contributions made by participants to TRON’s global ecosystem and for providing funds for subsequent R&D; 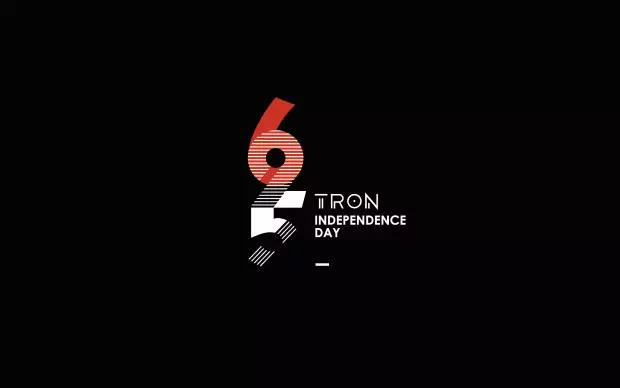 5. On June 21st, Justin Sun, Founder of TRON, published the open letter, i.e., “June 25th, TRON Independence Day. TRON’s Independence Day is finally here”, stating that: 1. TRON Foundation will conduct a burn of 1,000,000,000 TRX all on June 25 mainnet launch, which is worth 50 million USD according to today’s market price, thus the total amount of TRX decreases and the value increases. 2. TRON’s mainnet launch process includes four major phases: Preparation, Guardian Phase, Genesis Phase, and Constitutional Phase with community consensus. 3. With the preparation already done, the mainnet will be officially launched on June 25 10:00 am (GMT+8). 4. The TRON mainnet will be officially launched once all the twenty-seven GRs are replaced by SRs;

6. On June 21st, TRON officially announced that on the “Independence Day” of June 25th (GMT+8), TRON will officially launch the mainnet and get rid of the status as Ethereum ERC20 token. By then, community consensus will officially launch TRON network, create genesis blocks and achieve full independence, becoming one of the most competitive mainstream public chains in the world. Therefore, the day of June 25th is called “TRON Independence Day”, for TRON’s new journey will start since June 25th, 2018 (GMT+8). With all energy converged, we are ready to move on. We will also conduct online livestreaming on June 25, 2018 at 09:30 am -21:30 pm (GMT+8) on the “Independence Day”. TRON official will conduct the global 12-hour livestreaming, bringing all TRON community supporters to jointly witness the historical event;

7. On June 22nd, Weibo official account of TRON Chinese Community, TRON Official Weibo submitted information through the joint efforts of community supporters and believers to successfully upgrade and open the “TRON” super topic, after which TRON official can carry out project promotion and publicity more effectively, so that more friends can deeply understand TRON’s vision and ambitious goals in decentralized global ecology, thus increasing TRON’s influence in the blockchain and global technology field and better publicizing TRON’s projects and advantages.

1. On June 16th, TRON officially announced the information of 34rth as the super representative candidate. 34rth is a TRON volunteer community from Europe. It has held TRON SR roadshows spontaneously in Munich, London and Amsterdam, with three nodes have been tested: two complete nodes and one super node;

2. On June 17th, TRON officially announced the information of LinkVC as the super representative candidate. LinkVC hopes to be a more active participant in the blockchain revolution through the election. If elected, LinkVC commits to providing calculation and verification for more than 100M+ TRON supporters, while establishing servers and broadband for TRON users;

3. On June 18th, TRON officially announced the information of Bixin as the super representative candidate. Bixin provides top services for users globally, supporting Bitcoin, Etherum, EOS and other blockchain assets. Bixin is presently aiming to construct a blockchain platform that includes services such as transactions, payment, exchanging and other core functions. It is a platform that dedicated to letting everyone holding and using blockchain assets equally and protecting their own asset;

4. On June 19th, CoinEx announced that it would support the TRON blockchain upgrade and token migration. Founded in December 2017, CoinEx is a global and professional digital coin exchange service provider. CoinEx core team are from world leading internet and finance companies, including the earliest adopters/professionals of cryptocurrency who boast rich experience in R&D, global operations and services in the industry. With its proprietary trade matching system and excellent user experience, CoinEx is dedicated to building a highly secure, stable and efficient digital coin exchange for global users. CoinEx now supports multiple languages and provide global trading services in nearly 100 countries/regions;

5. On June 19th, Coinoah announced that it would support the TRON blockchain upgrade and token migration. Founded in 2017, Coinoah is a leading global digital asset trading platform created and operated by top professional teams from Singapore, South Korea, Japan, Thailand, and Hong Kong. Coinoah offers a variety of services about Ethereum and multiple cryptocurrencies to customers worldwide. Coinoah adopts bank-level technologies such as cold storage and multiple encryption to ensure the security and stability of cryptocurrency transactions. It is committed to creating the most professional digital asset trading platform for investment enthusiasts from all over the world;

6. On June 19th, Lianjinshu, one of TRON super representative candidates, developed a mini program for users. Focusing on TRON and committed to providing users with TRON’s real-time situations and latest news, this program contains five sections including super representative, daily price, TRON news, weekly report and technology, allowing TRON supporters to get all information about TRON within seconds only by opening it;

8. On June 20th, Cryptopia announced that it would support the TRON blockchain upgrade and token migration. Cryptopia Exchange has over 2 million global users and the world’s largest range of cryptocurrencies including Bitcoin and Ethereum. With access to dynamic charts, live coin information, world-class service and the largest range of coins, Cryptopia offers users the best global transparent exchange platform to trade cryptocurrencies;

9. On June 20th, Bitbns announced that it would support the TRON blockchain upgrade and token migration. Founded in late 2017, Bitbns members are young and enthusiastic adopters of cryptocurrency, all of whom graduated from IIT. Bitbns has open, transparent and clear communication; simple, aesthetic and easy to use interface; responsive and immediate customer support. Bitbns supports not just established currencies like Bitcoin, but also niche altcoins with real benefits;

10. On June 20th, TRON officially announced the information of READ as the super representative candidate. The company is the first to use blockchain technology to create a reading and investment community around traditional literature. Lianzai Reading, READ Token’s major Chinese partner, has helped the company sign on 3,000+ authors with nearly 2,000 works published, and reached 500k+ registered users. READ Token aims to create a blockchain-based online literature ecosystem where content and copyright are shared.

11. On June 21st, CoinBene announced that it would support the TRON blockchain upgrade and token migration. CoinBene is a cryptocurrency exchange based in Malaysia, CoinBene has already successfully positioned itself with about 1 Million sign-up users who located in USA, Vietnam, Japanese, Austria, German, Malaysia, South Korea, Mainland China, British, Russia and other 200 countries and areas. The volume of total transactions exceeded $5 billion with over 10,000 new users per day, 25,000 daily active users and daily transaction volume of ¥250 million;

12. On June 21st, Koinex announced that it would support the TRON blockchain upgrade and token migration. Koinex is India’s most advanced digital assets exchange, aimed at bringing the magic of blockchain technology to India. Koinex has been built over cutting-edge technology. Proprietary trading engine, wallet and platform architectures, grade A security, user-centric UI/UX, and tons of user-demanded features are some of the things which define Koinex;

13. On June 21st, CEO.Bi announced that it would support the TRON blockchain upgrade and token migration. Positioned on the high-end security exchange in Asia, the CEO brand provides trading services of multiple currencies such as Bitcoin, Ethereum and Litecoin to the world. As a secure and trustworthy digital asset trading network, the platform uses multiple technical security protections to create such a financial-class network, committed to creating a safe, comfortable and fast transaction channel for digital asset investment enthusiasts. The platform rigorously checks the identity of traders, safeguards the safety of members’ funds, and rejects non-real-name individuals and illegal capital inflows, allowing investors to trade with confidence.

14. On June 22nd, B-I.TOP announced that it would support the TRON blockchain upgrade and token migration.  B-I.TOP is a professional exchange for the majority of cryptocurrency lovers. Since establishment, the exchange has always adhered to the faith of “integrity comes first”. We always put our customers’ interests and safety at the top of the list in order to promote the development of the cryptocurrency exchange industry;

17. On June 22nd, LoMoStar announced that it would support the TRON blockchain upgrade and token migration. By creating a new type of barrier-free global monetary social model, LoMoStar aims to offer global assets for users, provide brand advertisements, and help build relationships between businesses and consumers. By cloning entity assets in the virtual world, LoMoStar aims to connect the physical and virtual world to help meet the pursuit of culture, entertainment and education. Through the circulation of virtual currencies, in combination with one’s geographical location, we are able to create a whole new online world by extending the value of the blockchain and integrating it with the geographical positioning of our users;

18. On June 22nd, OKCOIN Korea announced that it would support the TRON blockchain upgrade and token migration. OKCOIN Korea is the world’s most famous cryptocurrency and digital asset trading platform. Made up of outstanding talents from world-famous financial and network companies such as the Federal Reserve Bank of the United States, Alibaba, Tencent, Huawei, VISA, etc., OKCOIN Korea provides multi-cryptocurrency trading services including Bitcoin, Ethereum, etc. to over 2 million customers in more than 100 countries. We will provide the best trading environment based on the technology and experience accumulated so far through the 2018 South Korea service initiative.

1. On June 21st, TRX soared 5.62% with gains ranking first in the world’s top 10 cryptocurrencies, currently ranking ninth following the ADA. It is reported that TRON will start up the mainnet on June 25th, and the first super representative elections on June 26th, when TRON will become an underlying public chain.

An interview with TRONSR – Odyssey